Medicine for migraine can cause headache

This is just hilarious. I know this is a blog post that's a bit out of place for me, but I just had to get this in writing.
I sometimes get this splitting headaches, something like a migraine. Usually I take some ordinary mild medicine, and lie down for half an hour and that's it. But under some circumstances I have to keep on going and that's been a problem. Therefor I got this new medicine called Zomig Nasal. On the package it says "for treating headache/migraine" and it's some kind of spray to be inhaled in the nose. It's quite expensive but for those times I really need it this could be a great thing.

So today, after exercising my enormous skills as a carpenter (NOT!) I got this splitting headache. Unfortunately we were going to a party during the evening and I didn't want to stay at home. So I decided to take the medicine. I opened the box and just had to read the instructions before inhaling.

Imagine the surprise when I read about the side effects and it says that more than 1 out of 100 people will have a headache as a side effect. HA! Yea, you read it correctly. Headache! 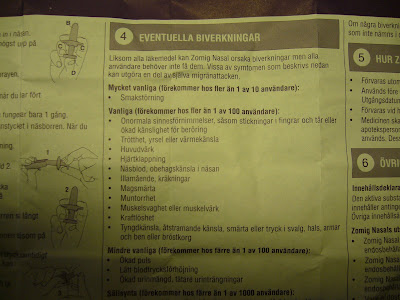 Unfortunately the text in the picture of the side effects is in Swedish.
And the worst part of this is that apparently I was one of the people that experienced this side effect. Now I'm not completely sure of this. The medicine could have no effect at all and my ordinary headache continued, in which case the medicine was totally useless. But my sensation was that my headache actually increased after taking the medicine.

Somehow I feel that it is strange for a medicine that is supposed to treat headache to actually have headache as a side effect, especially for such a large number of persons (1 out of 100). Maybe I should just feel unique and special to be amongst such a chosen group. Maybe I should think twice before inhaling something that could just as easily increase my headache, and the instructions clearly specify this.

Sometimes things like this just amazes me.
Posted by Ken Larsson at 00:37